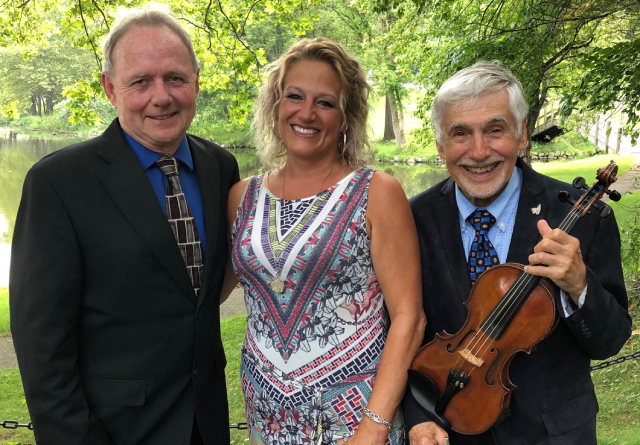 The BLT Jazz Trio in The Great American Songbook and All That Jazz!
Featuring Lana Hoffman, Terry Lower and Barry Ross
Music by Gershwin, Cole Porter, Duke Ellington and more

Presented by the Music and Arts Committee of First United Methodist Church of Kalamazoo. Please review our updated mask practice.

Lana Hoffman, Vocals
Lana Hoffman is widely regarded as one of the Midwest’s most versatile and engaging singers. Having performed the title role in Broadway’s “A Closer Walk with Patsy Cline”, she is also recognized as an accomplished jazz singer, in collaboration with many fine jazz artists. She is a featured soloist with local big band orchestras including The Gull Lake Jazz Orchestra and The Otsego Jazz Ensemble. Lana’s latest CD, “Live at Clara’s on the River” was recorded with Terry Lower and Larry Ochiltree.
Lana Hoffman is also the sole proprietor of Lana’s Boutiques, located in downtown Kalamazoo and St. Joseph, Michigan.

Terry Lower, Piano
Terry Lower began piano lessons at the age of six, and after studying at the prestigious Berklee College of Music in Boston, Terry returned to his native state of Michigan, and has been on the jazz scene for over 40 years. Considered by many to be a virtuoso jazz pianist, his performances here and abroad include 2 jazz tours in Italy, several stints on cruise ships, and performances with Bernadette Peters, the Mills Brothers, the Nelson Riddle Orchestra, and many jazz icons including Benny Golson and Frank Morgan. Also a prolific writer, Terry has penned compositions and arrangements for recordings and performances by small ensembles, big bands and large orchestras, including the Billings Symphony, the Brass Band Of Battle Creek, and the Rochester Symphony Orchestra. In 2016, Terry was voted by the West Michigan Jazz Society as their outstanding musician of the year.

Barry Ross, Violin
Barry Ross grew up in Boston and was the first violinist to receive a Doctor of Musical Arts degree from Yale University. In Michigan, he served as Assistant Conductor and Concertmaster of the Kalamazoo Symphony Orchestra for 35 years, during which he introduced the Family Discovery Concerts series and built the Kalamazoo Symphony Youth Concert programs.
Ross is Professor Emeritus of Music at Kalamazoo College, where he founded the Kalamazoo College and Community Orchestra and Chamber Orchestra, now the Kalamazoo Philharmonia. He has appeared as Conductor, Concertmaster and Violin Soloist all over the country. Barry teaches at the Crescendo Academy of Music and performs as guest Violinist, Concertmaster, and lecturer. He has published numerous articles and books on music-making. In retirement he appears as soloist and is busy improvising the great classics of jazz.